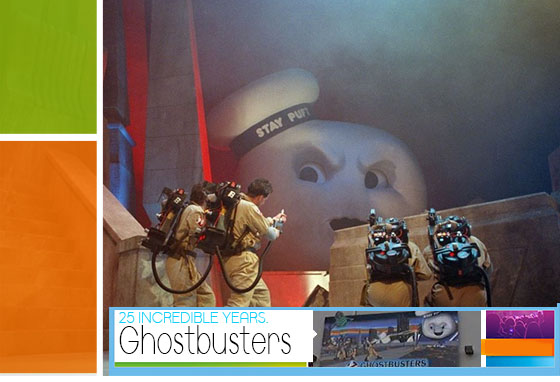 As you enter a small room you hear telephones ringing and a man saying, “Ghostbusters, Please Hold!”

This man is Louis Tully, the junior assistant vice-president of finance for the Ghostbusters and a character from the films and says that you are here for the investment opportunity of a life time.

Sometimes Louis makes a Ghostbuster joke that if customers do not pay, “You can release the ghost back into their house, it is even better than having to repossess cars!”

He then proceeds to show a quick promotional commercial advertising Ghostbusters as the best job in the world, and afterwards picks three volunteers.

The first one (usually a child) is given the task of holding a pink goo that is continually falling in his/her lap.

The second one, usually a middle-aged man, is given a machine to put on his head that is supposed to read his mind.

Then Louis tells the audience to look at the televisions again and on the screen is the man’s “thought”, which is him in a wedding gown.

Other monitors sometimes would have the man’s “thought” of him being kissed by two supermodels.

And lastly there is a third one, usually a woman, is given the task of holding a piece of ghost hunting equipment that Louis grabs hold of and squirts the audience with. Then he blames the volunteer. After this Louis instructs the audience to move to the next room.

Once everyone is seated, Louis begins to show you some new products, which he introduces as Starter Kits #1, #2 & #3, ranging respectively from least expensive to most expensive.

As Louis is talking he is interrupted by Walter Peck, a government agent (and a character from the first film), who says that he is shutting down Ghostbusters due to fraud and violations of the Environmental Protection Agency.

Louis protests that Walter cannot shut down the Ghostbusters as they capture dangerous ghosts, and asks Walter and the audience if they believe in ghosts.

Walter then asks the audience, “Ghosts? How ridiculous! How many of you believe in the federal government?” usually prompting the audience to boo and jeer Walter Peck. As Walter tries to shut it down Louis gets him to look the other way and Louis turns the lights off.

In the darkness, a ghost appears telling Walter Peck to run away, but it is revealed to be just Louis controlling a fake ghost simulation. Walter, not being easily deceived, flips back on the lights and tells Louis he is shutting them down now.

He walks over to a flight of stairs, as Louis trails behind, and flips a giant switch which unlocks the ghost containment area and sets off blazing sirens. Then suddenly he is in through a door.

After this a stage behind and above the aforementioned stage lit up and turned out to be a recreation of the Temple of Gozer.

As Walter explains how he does not believe in ghosts, many ghosts (including Slimer) flash behind him.

Then a thunderous noise is sounded and Gozer appears at the top of the temple gates. He begins to attack Walter when the Ghostbusters theme song begins to play and they (along with Louis) come out to save the day.

As they try to shoot at Gozer and the other ghosts they miss every time and Gozer makes it back to the gate doors. Before she leaves she says, “Your fate is sealed. Choose and perish!”

As they try to figure out what just happened, the head of the Stay-Puft Marshmallow-Man appears and begins to roar.

As they shoot him he turns red and is engulfed in smoke that cover the entire stage and pours out into the audience.

Moments later the Ghostbusters reappear and say thank you as Walter, now covered in melted marshmallow, yells at the Ghostbusters. They then leave for the gift shop. (Photo Below From RONIN SPECIAL EFFECTS) 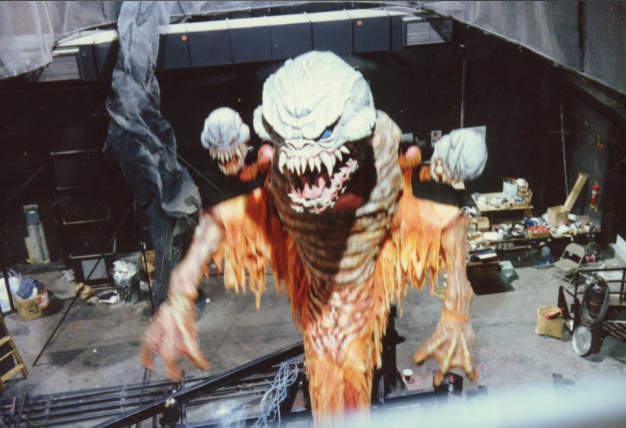 I got the chance to talk with Seth Kubersky of Touring Plans, he used to be a tech on the attraction. Here’s what he had to say!

I was a “Tech 5” entertainment technician on the Ghostbusters show. I was hired during the summer of 1996 and only worked there a couple months before it closed and I was transferred to Terminator 2/3D. I loved my brief time at Ghostbusters, since most of my day was spent in the control booth watching the show run, or relaxing in the green-room backstage.

While I was there the show was fairly reliable, there were always Ride & Show technicians working overnight to keep the animatronic running, but it was rare that we had to cancel a show for technical problems.

As most people know, the main show was a giant Pepper’s Ghost effect like the Haunted Mansion ballroom. The technicians sat in an elevated control booth where we could look down on both the stage with the live actors, and the black room containing all the ghosts. It was fascinating to watch the animatronic figures move in and out of position automatically and then be illuminated at the right time to appear on stage. All the technician really needed to do was to keep their hand on an “enable” switch to give the computer that ran everything the all-clear.

I’m not certain how many actors there were at any one time, I believe there were 3 Ghostbusters, one Tully, and one Peck per shift. Usually there were at least 2 Tech 5’s at a time. Scheduling would depend on park hours and how often we were doing shows, but I don’t remember specifics.

The funniest thing that I ever saw at Ghostbusters happened one day shortly before the show closed. I was in the booth with another technician and we noticed that there were no Ghostbusters on stage. Louis Tully was running around the stage in a proton pack, trying to make every single blocking point for all of the Ghostbusters to zap the ghosts, and screaming at the top of his lungs for some help. It turns out that the rest of the cast was hanging out backstage and hadn’t heard their places call, causing them to completely miss the show. They all went out at the end and did a meet and greet after, and we never spoke of that performance again…

I don’t know where any of the props are now, but for many years the stone Terror Dogs from the main stage were kept in the prop warehouse and used as scenic decor for Halloween Horror Nights. They’ve probably crumbled to dust by now.

Seth was at the attraction for the final show in 1996. He said that Michael Mormon, who started at Ghostbusters and later on ended up running the Universal entertainment department, came back for the final show. Michael didn’t completely remember the blocking and the stage positions, but it was very entertaining to watch!